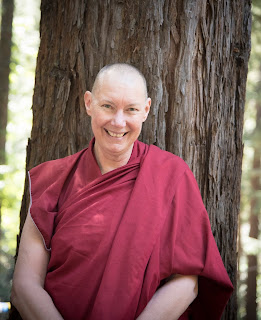 Venerable Tenzin Chogkyi  (she/her/hers) is a Buddhist monastic, activist and teacher of both Buddhist and secular programs. She loves bridging the worlds of Buddhist thought, current events, and the latest research in the field of positive psychology.

Ven. Tenzin is especially interested in bringing the wisdom of Buddhism into modern culture and into alignment with modern cultural values such as racial and gender justice, and environmental awareness. She has been exploring the presentation of traditional teachings using modern pedagogical methods such as experiential exercises, dialogue and small group interaction. She feels that Buddhism has many rich perspectives and techniques to offer for the development of the whole person in all aspects – emotional, cognitive, social, and so on – and can be used to help us deal more skillfully with the challenges of our lives. To this end, she has been collaborating with teachers of Non-Violent Communication, conflict resolution, psychotherapy and other disciplines to design programs to meet specific needs.

Venerable Tenzin first became interested in meditation in the early 1970s and then started practicing Tibetan Buddhism in early 1991 during a year she spent studying in India and Nepal. She worked in administrative positions in several Buddhist centers in the 1990's, and also completed several long meditation retreats over a six-year period. Venerable Tenzin took monastic ordination in 2004 with His Holiness the Dalai Lama.

Since 2006 she has been teaching in Buddhist centers around the world: in North and South America, India, Nepal, Australia, and New Zealand. She has been the resident teacher of Mahamudra Centre in New Zealand, Gendun Drubpa Buddhist Centre in central British Columbia and Vajrapani Institute in California. She is also a visiting teacher for the Liberation Prison Project and has taught in prisons in the US, Colombia, Australia, and New Zealand.

In addition to teaching Buddhist philosophy and meditation and leading retreats, Venerable Tenzin is a certified teacher of Compassion Cultivation Training, a secular compassion training program developed by Geshe Thubten Jinpa and colleagues at Stanford University. She also teaches the Cultivating Emotional Balance program, a secular program using contemplative techniques drawn from Buddhism for managing emotions, developed at His Holiness the Dalai Lama’s request. She is a facilitator of the a.r.t. of Fulfillment, one of the secular programs of the Foundation for Developing Compassion and Wisdom.

She is an adjunct faculty member at John F. Kennedy University in the Holistic Psychology department. She loves interfaith collaboration and is a volunteer for the Interfaith Speakers Bureau of the Islamic Networks Group in the greater San Francisco Bay Area, and is also on the Bay Area Board of Directors for this organization. She is featured on a monthly radio show called "Reflections on Buddhism" on KSQD 90.7 in the Santa Cruz area. The show airs on the third Sunday of each month at 6:00 pm.

Since August 2018, she has been based at Land of Medicine Buddha in Soquel, California, on traditional Awaswas and Amah Mutsun Ohlone land, a beautiful center in the redwood forest close to the Monterey Bay where she teaches in the local community, continues her prison work and her engagement in social justice activism.